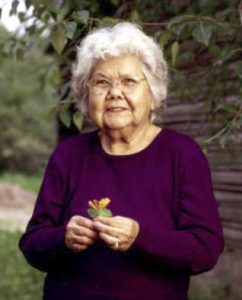 Elder Mary Thomas was a highly respected Neskonlith Elder of the Secwepmec (Shuswap) Nation in the Southern Interior of BC. She was an avid environmentalist and a devoted teacher who spent her lifetime educating both the young and old about the need for increased environmental awareness, conservation and preservation. She believed in preserving and promoting traditional practices as a way to heal both the land and its people.

Mary was a pioneer in early learning and child care and championed the importance of the early years in improving the lives of young children. In 2004, the Centre of Excellence for Early Childhood Development awarded its Medal for Exceptional Contributions to Elder Mary Thomas, in recognition of all her outstanding contributions to the field.

The recipient of two honourary degrees (including an honourary doctorate from the University of Victoria in 2000), Elder Mary Thomas shared her knowledge, skills and experience in ways that have made positive and lasting impacts for all Indigenous children. She was a strong and passionate supporter of the BC Aboriginal Child Care Society. In admiration of her lifetime of commitment to the health and well-being of Indigenous children, we have named our ECE scholarship in her honour.

(University of the Fraser Valley)

(Camosun College & College of the Rockies)