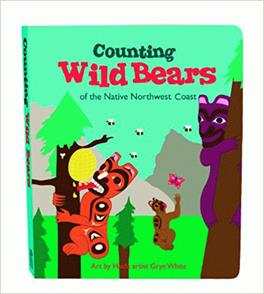 Spring has arrived; celebrate by exploring the variety of books available in the BCACCS Resource Centre on bears. If you would like more information contact library@acc-society.bc.ca.

Coming from the oral traditions of the Sechelt Nation, Mayuk the Grizzly Bear: A Legend of the Sechelt People, is a traditional teaching legend that tells the story of a boy who was injured by a bear. After the boy was treated for his wounds, his grandfather named him after the bear in the hopes that he would gain the animal’s attributes.

Counting wild bears of the Native Northwest Coast is a book that not only teaches young readers how to count, but also helps children understand the importance of bears in Haida traditions by presenting them throughout the book in their regalia and art.

The Woman Who Married a Bear is a tale that tells the story of a woman who is captured by Bear People and learns to respect them when previously she did not.